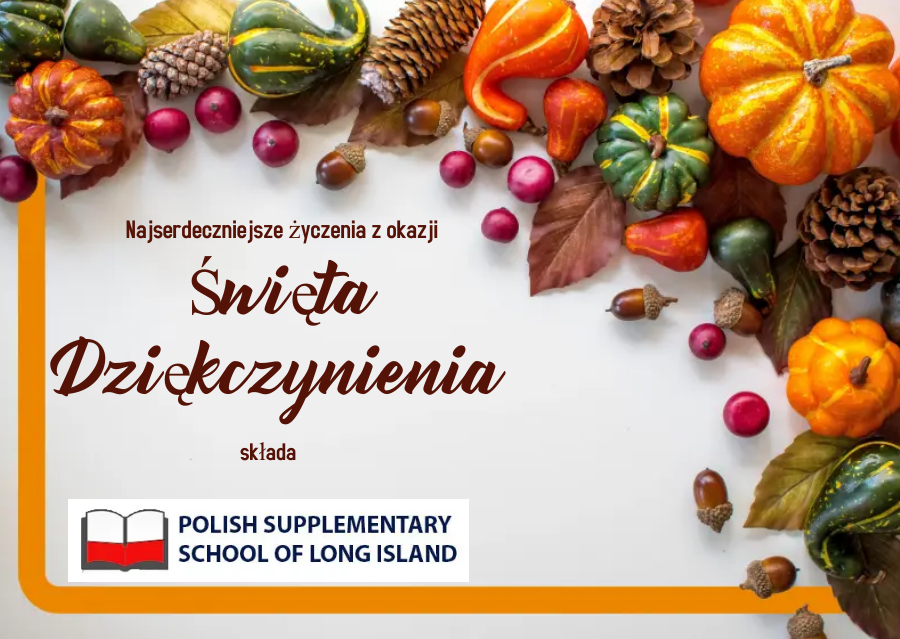 The tradition of Thanksgiving dates back to 1621. It was the first time that English colonists living in Plymouth, now Massachusetts, held a special thanksgiving ceremony for the exceptional harvest.
They wanted to thank God for all the favors received, and in particular for the successful harvest, which guaranteed the survival of winter without the specter of hunger. Friendly Indians were invited to the feast, who had previously taught the white newcomers the art of survival in a strange, unknown land, showing them the wonderful abundance of fruits of the surrounding nature. Wild turkeys, maize, pumpkins and squash were treated to unknown in Europe at that time.
Today, Thanksgiving Day is celebrated annually on the fourth Thursday of November. It is the most important family holiday in America, comparable to the Polish Christmas Eve. At the same time, it contains elements characteristic of the well-known harvest festival. Wicker baskets with fruit and vegetables and bouquets of autumn flowers and dried grasses create a beautiful interior decoration of houses and create an atmosphere of family warmth. The typical menu refers to the traditional menu: the table is dominated by a baked turkey, stuffed with sage-spiced bread stuffing, cranberry and sweet potatoes, and a pumpkin pie for dessert. The turkey is customarily cut by the father of the family, and the children parade dressed in black historical colonist costumes, wear high, pointed hats, and shoes must necessarily have large, silver buckles.
A completely modern custom of Thanksgiving Day is watching a soccer game on TV for the family. The teams from the National Football League (NFL) and the American Football League (AFL) take part in the competition.
The Europeans who celebrated the first Thanksgiving were from England, they were devoutly religious Puritans. Before reaching American soil, they took refuge in the Netherlands in 1609 from religious persecution in their homeland. They quickly acclimated to the new country, and their children adopted the customs, language and lifestyle prevailing in the Netherlands, which unfortunately threatened to lose their faith and national identity. So they decided to leave Europe and go to the New World. The costs of the long and dangerous sea voyage were financed by a group of English investors, Merchant Adventurers. The contract provided for the reimbursement of the incurred expenditure in the form of work for 7 years. On September 6, 1620, the Mayflower left the English port of Plymouth with 44 pilgrims on board, known as Saints, and 66 others, known as Strangers. During the 65-day voyage, the Saints and the Strangers disagreed, but after landing in Plymouth, named after England's home port, they agreed to reach a settlement whereby both groups of emigrants would have the same rights and obligations, and henceforth be called Pilgrims. John Carver was elected governor of Plymouth. The first winter on the new land was disastrous for the colonists. More than half of the newcomers died of hunger, cold and disease. In March 1621, the Indians entered the settlement. One of them - in English! He greeted the colonists. It was an Abnaki Indian named Samoset, who soon brought the Squanto Indian, who spoke even better English. The names of these friendly Indians have survived over the centuries because it was thanks to them that the Pilgrims managed to survive on American soil and make themselves at home.
The newcomers did not have any agricultural experience and were not used to manual labor. Squanto has learned to distinguish between poisonous and medicinal plants. He showed how to grow corn, how to hunt game and where it is easiest to catch fish. He pointed out materials for building warm, quiet houses. The autumn harvest was plentiful, and the stocks of salted fish, smoked meat, fruit and vegetables were a guarantee of surviving the coming winter.
Pilgrim Governor William Bradford proclaimed Thanksgiving in mid-October for God's protection and selfless help provided by the Patuxet Indians. A wonderful feast was prepared. Celebrations with music, singing and competitions lasted 3 days. The agricultural and hunting skills acquired from the Indians made it possible to look at the coming winter and the coming years without fear. The future of the newcomers in Nowy Świat was brighter. From this year on, November 29 (the last Thursday of the month) was made Thanksgiving, celebrated by colonists on the coast of America in New England. This tradition continued in the following years. During the American Revolution (1870s), the Continental Congress proposed making Thanksgiving a national holiday, and many States accepted the proposal. However, it was not until 1863 that President Abraham Lincoln proclaimed the holiday binding. Currently, the fourth (and not the last) Thursday of November has been approved as Thanksgiving by President Franklin D. Rooseve

By shoping, you support our school

We celebrate All Saints